Autumn is the traditional time of the year to harvest tree saplings, branches, and twisty sticks for cane and walking stick carving.  As the leaves change color and begin to drop the branches and trunks of the available saplings become more visible.  The sap in the tree’s vascular system is dropping which aids in drying. During one morning’s walk through my yard I found twelve favorite tree saplings and cultivar branches that can be used in your walking stick wood carving.

Click on the images for a full-sized photo.  All links go to Wikipedia.org where you can learn more about each tree species. 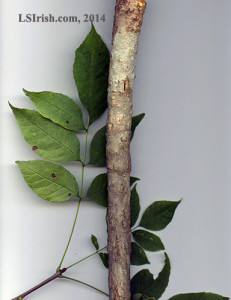 This extremely dense, hard wood is perfect for small walking sticks and canes. It is commonly used for tool handles, wheel spokes, golf club shafts, and canoe paddles because of its strength.  Hickory grows in the eastern half of the United States, Canada, and Mexico, and is often found in association with oak and maple forests. The sample shown is Carya cordiformis, commonly called Bitternut Hickory, Swamp Hickory, or Pecan Hickory.Hickory is a major food source for the luna moth.

Hickory has a medium-grey coloring with light texture.  Pale white and light green spotting is common in the older growth areas of the bark.  Look along the edge of the wood line and forest for this particular tree. 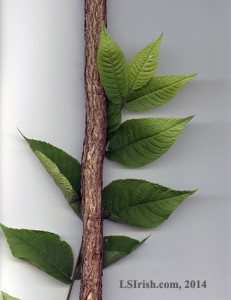 Traditionally this hardwood is used for gun stocks, furniture, and flooring, as well as for the edible nuts. Walnut hulls have been used to create writing ink and dyes.  Native to the east coast of midwestern sections of the United States, it was introduced to Europe as a cultivated species in 1629. It is a pioneer species, along with black cherry and silver maple, populating open fields and wetlands in advance of larger forest growth.

Often called Weed Trees, black walnuts are fast growing.  A two-year old seedling can stand 6 to 8 feet tall and have a base diameter of 1 1/2″, perfect size for a cane stick. The sample shown is an Eastern Black Walnut which has a reddish-brown coloration to its highly textured bark.

Also called Persian Walnut, White Walnut, Old World Walnut, and California Walnut are native to the Balkans, eastward into the Himalayas and southwest China.  The wide distribution of English Walnut throughout the world is due to its easy cultivation and harvest for its nuts. In the fourth century English Walnut was introduced to Macedonia by Alexander the Great. It has a very smooth, pale gray bark and can attain heights of up to 25 to 30 meters. It is used for gun stocks, furniture, guitars, and veneer. 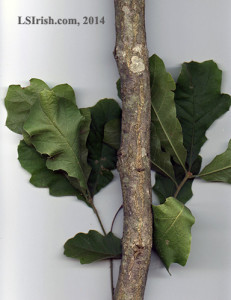 There are approximately 600 extant species of oak, which is a common tree to most of the Northern Hemisphere. America has nearly 90 native species and is commonly found in large forest stands and in home landscaping. This is a major furniture wood, and used in timber-framed building and ship construction. Oak bark, rich in tannin, is used in tanning leathers.

The sample shown is a species of White Oak, and happens to be the state tree of Maryland.  White Oak has a medium-grey coloration with large spotting of white.  Lichen and moss are often found growing on the branch.   The texture of oak changes dramatically, depending on the age of the branch.  All oak bark has some rough texture, and as the tree ages the bark develops troughs and ridges that can be up to a half-inch in-depth.

Oak is an extremely dense hardwood which gives it the strength needed for quality walking sticks.  However, because oak tends to branch quickly, at a young age, you seldom find long, straight trunks.  Note in the sample photo that this four- to five-year old sapling already has several angles to its main trunk. 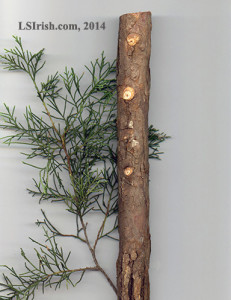 Red Cedar is not a true cedar, even though that is its common name. Eastern Red Cedar, Pencil Cedar, and Aromatic Cedar are part of the juniper family. This slow-growing hardwood prefers poor, dry soil conditions and found throughout the eastern United States. It is a pioneer species, investing open fields and surrounding abandoned buildings.

Because of the purple-red heartwood Cedar is often used for decorative wood working and furniture, as cedar chests or cedar closets.  At one time this species was a common fence post wood. Cedar can have a high sap content, and may need extra drying time before use.

Black locust is considered an invasive species today, but just a few generations ago it was the major wood source for fence posts and firewood in the US.  Its extremely dense, hard wood naturally retards rottings, allowing a post to last for three or more decades.  It can reach heights of 70 feet with three foot wide trunks.  Locust is found along the terminal edge of the forest, in front of the main canope.  It does have thorns, spikes, along the trunk and branches, so handle locust carefully. 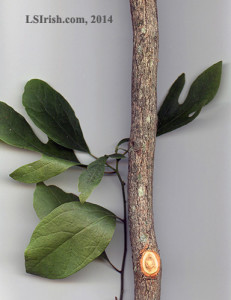 This small deciduous tree, 30 to 50 foot tall, is native to eastern North American and eastern Asia. The bark of the new branches has a smooth, mid-gray colored texture during its early growth, with the trunk and older branches having a deeply furrowed, red-brown colored bark.

Because of the small size of this tree it is not a common furniture or wood working wood. Instead it is used in creating essential oils for perfume and soaps, as well as the primary ingredient for root beer.

Sassafras is the host plant, the primary food source, for spicebush swallowtail butterflies. – This is an excellent winter food for white-tail deer, groundhogs, and black bears, as well as a summer source of berries for bobwhite quail, wild turkeys, and woodpeckers.  Look along old fence lines and crop-field drainage ditches for this walking stick wood. It is a wonderful ornamental yard tree that brings butterflies to your flower and vegetable gardens. 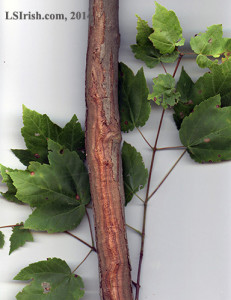 Native to Asia, Europe, northern Africa, and North America, there are 128 species of maple, of which fifty-four are under threat of extinction in their native habitat.

This is a common landscaping tree that grows quickly under many environmental conditions. Maple is a major timber source, as well as providing sap for maple sugar and Tennessee Whiskey. This dense, hardwood with its clean, white coloration makes is perfect for use in musical instruments as violins, violas, and cellos. Maple is also a primary pulpwood for paper.

This particular maple sapling has a long scar where a buck deer used the sapling to rub off the summer velvet from his antlers, adding a bit of interest to an otherwise plain, smooth, pale-grey bark. 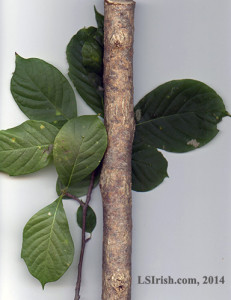 Elms are native to the northern hemisphere and are found as both deciduous and semi-deciduous. It grows in a wide diversity of environs, having only one major requirement of good drainage to the soil.  It can be difficult to determine which species of elm you might encounter as this tree easily interbreed between the 30 or so major species to create micro-spieces, native to very small, local regions. In the US the most common species is Ulmus americana, a fast-growing landscape tree.

Because of the strength of elm’s interlocking grain it is used in wagon wheels, wagon wheel hubs, chair seats, and coffins. 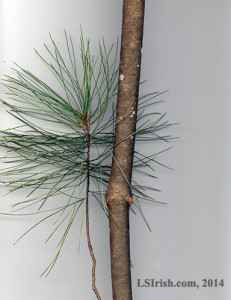 White pine grows from Newfoundland through the Great Lakes region, Minnesota to Manitoba, and south along the Mississippi Basin to the Appalachian Mountains.  It is a fast growing, soft wood tree, used for roughing lumber, furniture work, and the most common tree for sailing ship masts.

Pine has a clear, white coloring when first cut that darkens to a deep golden orange tone with age. It has wide grain lines, with heavy-sap areas in the multiple knot holes. 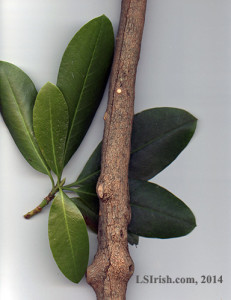 This small tree species enjoys colder climates and is found from the 80 degree latitude north throughout from North America, Europe, Russia, Asia and including some areas of Australia.  In its native habitat Rhododendron is found just within the terminal edge of the forest.  It prefers some light shade and grows under the taller trees’ canopy.

This species has been under cultivation since the mid 1700’s and is a common landscaping shrub that does occasionally require pruning.  Rhododendron grows multiple small side branches that last for only a few seasons.  When the  branches dies they leave a raised mound along the side of the main branch, which will add interest to your walking sticks. 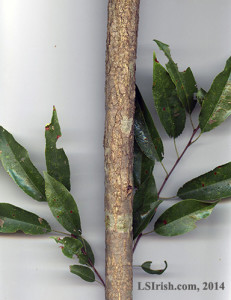 Often considered a weed tree in eastern North America, this species is a major wildlife and song bird food source.  It has an extremely rough, broken-looking bark on the main trunk of the tree, but the branches can appear as if they were wrapped in thin sheets of grey-gold paper.  Small green and white spotting is common on the very young branch bark.  This is a pioneer species, found along old fence lines, hedge rows, and in abandoned fields.   When possible chose three to four-year old sapling trucks over larger branches to obtain strong, straight staffs 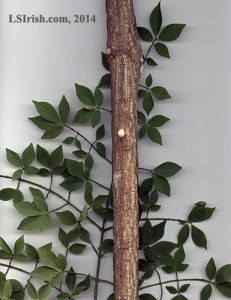 Burning Bush is the common name for an Euonymus cultivar that is used in landscaping.  Also called Winged Euonymus or Winged Spindle, this bush can easily obtain heights of ten feet with a spread of up to fifteen feet.  During fall the leaves turn a vivid red coloring, hence the name Burning Bush.  For our use in cane carving, the older stems of the Winged Euonymus make extremely interesting walking stick shafts.  The bark of this Euonymus species has protruding ridges that runs down the four sides of the branch, thus the name ‘winged’.

Chose main branches, not side branches, that are at least 1″ or wider in growth.  Cut the branch as close to the ground as possible to avoid leaving a ‘die-off’ in the center of the shrub. 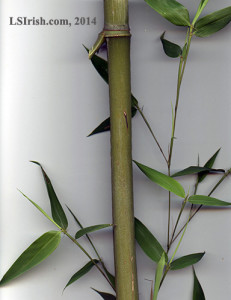 Bamboo is not a tree, but a flowering, perennial grass that reproduces from underground rhizomes.  There are over 1450 species of bamboo, which is native from southeast Asia through Australia, and a common landscaping plant in North America.  New shoots begin in the early spring, and can grow up to four feet in one day.  By the end of summer the average new shoot, depending on the species, can reach 30 to 40 feet in length.  Only harvest two -year or older growth.

Bamboo is a perfect walking stick wood as it grows in extremely long, straight lengths.  You can cut several walking sticks from one three to five-year old cane.  Because the sections of bamboo between the branch nodes is hollow, this is a very light weight, but very strong staff material.